We put on at least one public performance a term.

As a choir performing is our lifeblood. We love it! We enjoy lots of opportunities to perform, from our end-of-term concerts, open mic nights, and festival appearances to one-off special events such as supporting pop stars or providing entertainment at sporting events.

We aim to perform a concert at the end of every term. This is the best bit for many members – after all, it’s what we spend the term working towards.

In recent years some of our concerts have been themed. So far, we’ve focused on the 70s, the 80s, the 90s, and Stage & Screen. Concert venues have included The Royal College of Surgeons, The Grand Connaught Rooms and Troxy, a magnificent art deco music venue.

Our summer concerts take place at the Skylight bar of Wapping’s Tobacco Dock – a fabulous outdoor rooftop venue. Our afternoon concert segues seamlessly into a summer party, that includes food, drink, a DJ, and maybe even a singalong.

Our Christmas concert incorporates a lot of Christmas favourites, both American songbook and pop classics. We even include one or two more traditional numbers, including Richard’s epic Festival of Carols (all of the carols).

Dress Code: For any of our non-themed concerts we ask singers to wear any of the colours from our logo (bright red/pink/orange) teamed with black if necessary. No patterns, no pastels, no white! For our themed concerts we strongly encourage dressing up, and our members embrace this with enthusiasm. In previous years our stage has been graced by Elton John and his giant sized boots, glitter balls, punks, ET and the whole cast of The Wizard of Oz (including the Yellow Brick Road!) Dress code for our Christmas concert is usually rich colours and sparkles, or Christmas-themed fancy dress. One year we had a whole forest of Christmas trees! For most concerts you’ll be standing all the way through, so wear comfortable shoes.

At concerts the choir is supported by either a live band or expertly recorded original backing tracks. We use sophisticated microphones and mini speakers to give singers and audience the best audio experience.

To take part in our concerts you need to be a fully paid-up member of LCV and to have attended at least seven rehearsals.

In addition to our formal concert programme we also use our voices to raise money for charity.

Christmas Station Singing: Once our Christmas concert is over, we often give up a few evenings (or mornings) singing for charity at railway stations at rush hour. In 2019 we helped charities collect more than £1400, bringing a smile to the faces of hundreds of commuters!‍

London Marathon: We support London Marathon runners every year by singing at Parliament Square. For about 5 hours we entertain the other spectators, organisers and charity collectors with lots of our repertoire. “Break My Stride”, “Sit Down” and “Go Your Own Way” are great favourites here.

You’ve Got A Friend: In 2020 over 250 of us came together virtually to produce a charity video of Carole King’s “You’ve Got a Friend”. Vastly exceeding our initial expectations, the video raised over £100,000 for the charity Women’s Aid!

In summer 2019 LCV took part in two great festivals – Brighton’s Great Escape and London’s Citadel. We hope to repeat these events and add to them in the future.

Twice a term we hold a live open mic night, where choir members get to perform to their friends and family. We are a very supportive and appreciative audience. We have had original material from singer songwriters, superb covers, new arrangements presented by mini-choirs, showtunes, classical hits and even madrigals. They usually take place at St Mary-at-Hill after a Wednesday rehearsal, which we set up with lights and PA to turn it into a fantastic indie venue à la Union Chapel.

If you have a party piece this is where you can show it off. If you need an accompanist you can put a shout out to other members as we have a multi-talented crew. Don’t worry if you’re not ready to go solo just yet. There are several people within LCV who love putting together groups to perform. Just ask Richard or Kate to point you in their direction if you’d like to join one.

A couple of times a year we hold a virtual open mic night. Performances are submitted on video, and we host a fabulous event over YouTube from Richard’s studio. Over lockdown many of our members have developed hitherto unknown video editing skills.

Anyone can attend our open mic nights as audience, but to perform you must be a fully paid-up member.

In addition to our regular performances, occasionally special one-off opportunities arise, often at a moment’s notice. We have sung at Wembley stadium for the Challenge Cup final, and at the première of Bohemian Rhapsody at Westfield. We’ve also been privileged to sing in such prestigious venues as the Tower of London, and to support such superstars as Damien Rice and Annie Lennox.

The first rehearsal is free so you can see if we're the right choir for you. 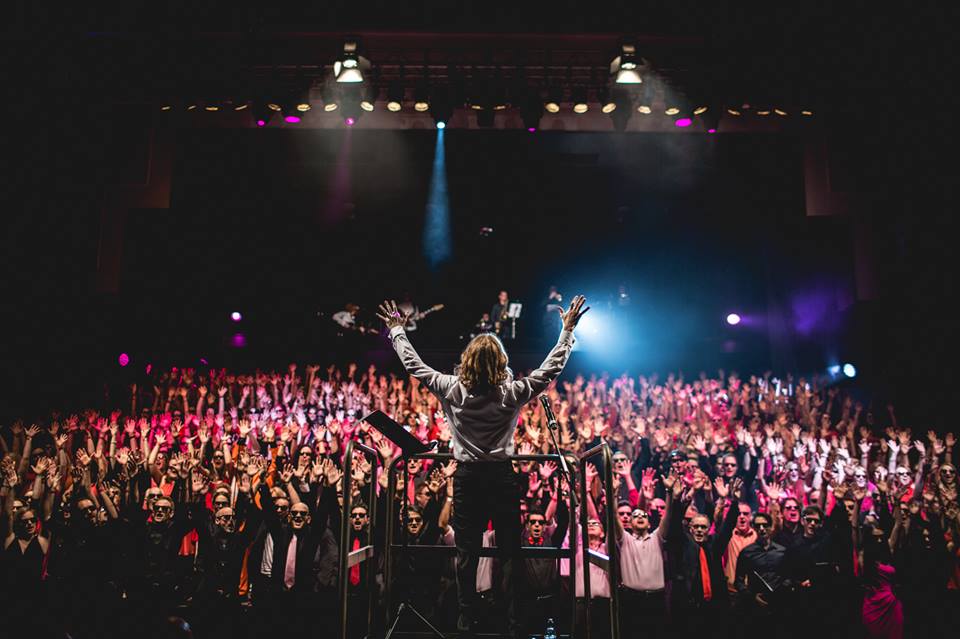 We put on at least one public performance a term. 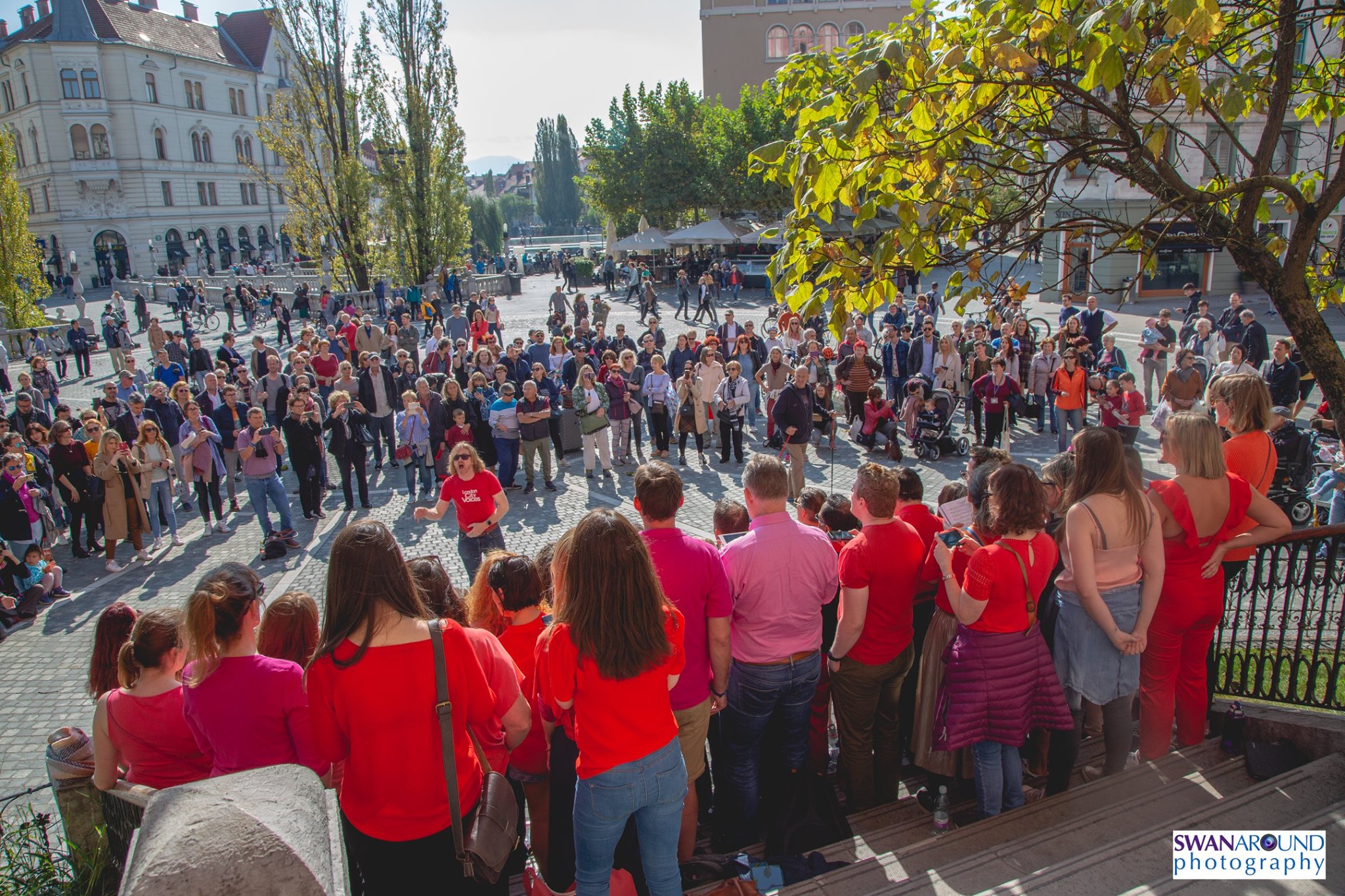 We organise regular mini breaks and choir holidays for our members. 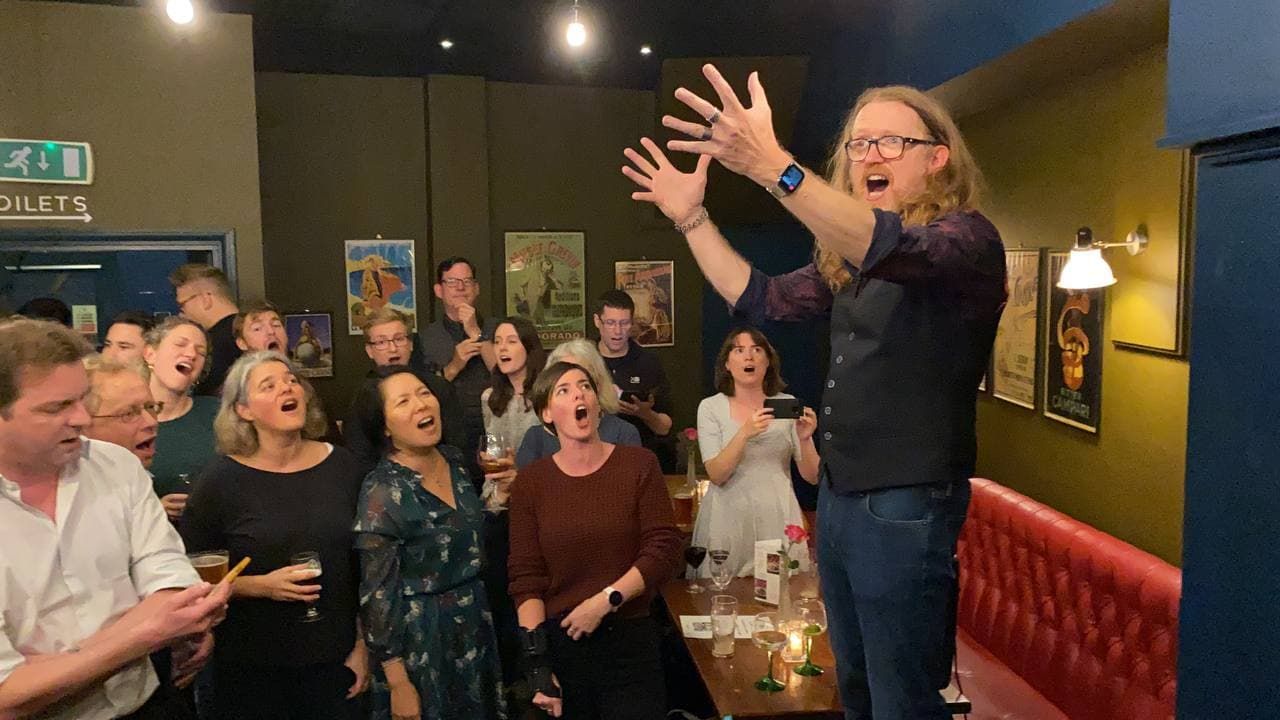 Membership of London City Voices gives you access to a very active social community, both face-to-face and online. 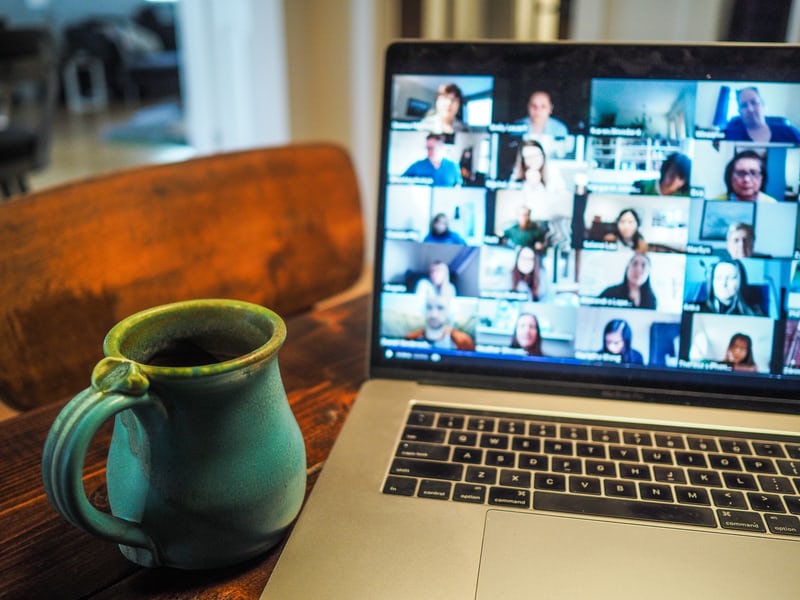 Once or twice a term we run workshops exploring some aspect of music.